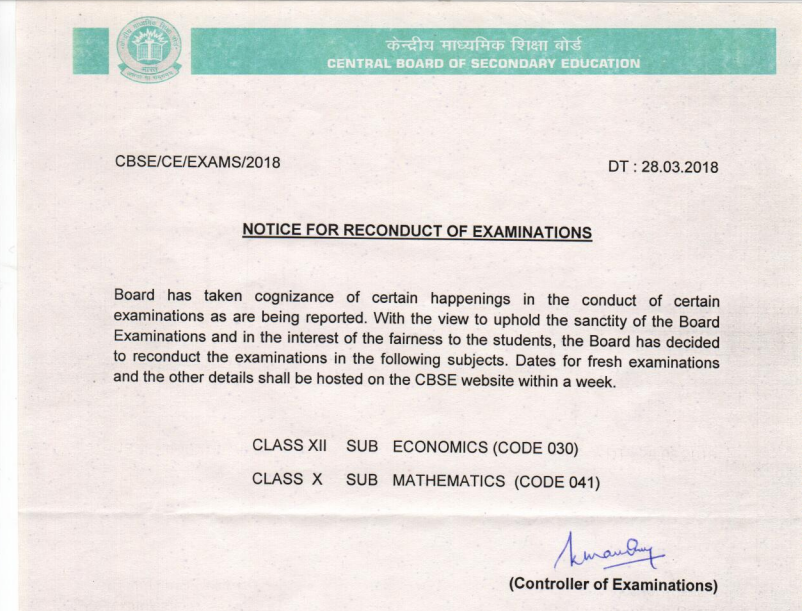 "Board has taken cognizance of certain happenings in the conduct of certain examinations as are being reported. With the view to uphold the sanctity of the Board Examinations and in the interest of the fairness to the students, the Board has decided to reconduct the examinations in the following subjects (Class XII -- Economics and Class X Mathematics)," the Central Board of Secondary Education (CBSE) said in a statement today.
The CBSE order says that the dates for the fresh examinations will be shared soon.
"Details shall be hosted on the CBSE website within a week," the statement said.
The Class X Maths examination was held today; Class XII Economics exam was conducted on Monday.
A hand written question paper of the Class XII Economics examination had allegedly been circulating on WhatsApp a day before the examination. Many questions in this "leaked" paper were the same that appeared in the actual examination.
Students who took the Class XII Economics exam said the question paper was of average difficulty. This year, the CBSE had changed the marking scheme for Economics and introduced practical component of 20 marks in the paper, which means that the theory exam was conducted for 80 marks in total. The paper had two sections - macroeconomics and microeconomics. Each section had 12 questions making the total number of questions 24 which is six lesser than previous years.
According to reports, a major chunk of the questions asked in the Class X Maths paper were from NCERT textbooks. Students said the exam was easier compared to other exams this year, but a tad bit lengthy. Class 10 Maths paper is one of the last major papers the student attended this year.
Over 28 lakh students are taking the Class X and Class XII board exams this year, which began on March 5.
(From: ndtv.com)