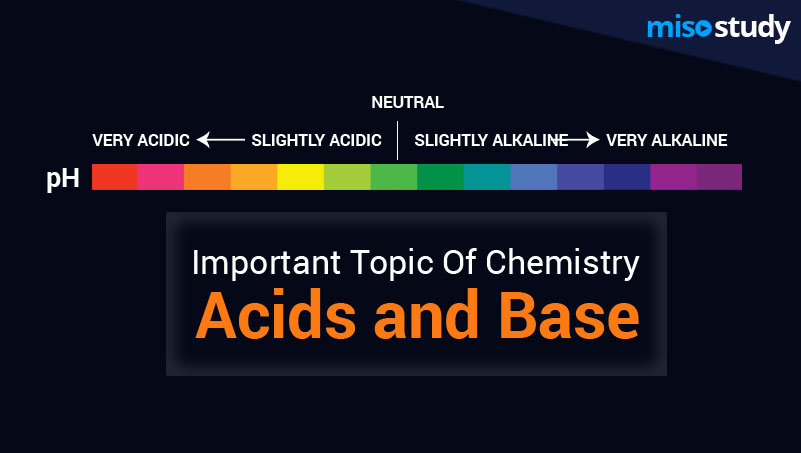 Normally it is said that acids are sour in taste and change the colour of blue litmus to red. Whereas alkali, which is a more general term used for bases are bitter, and change the colour of the red litmus to blue. But here is a detailed definition that explains the characteristics, properties and behaviour of acids and alkalies. There are many theories used to characterise acids and alkalies, but the most accepted ones among them are:

- The Arrhenius theory of acids and bases was originally proposed by the Swedish chemist Svante Arrhenius in 1884. He suggested classifying certain compounds as acids or bases based on what kind of ions formed when the compound was added to water.

In the same way, an alkali ionises to furnish OH-ions in the aqueous solution, thereby increasing the concentration of OH- in the solution.

In the early 1900s, an alternate definition for acids and bases was proposed by Johannes Bronsted and Thomas Lowry to account for the fact that ammonia can neutralize the acidity of HCl even if water isn't present.

Here HCL donates its H+ ion to NH3. Hence, NH3 acts as a base and HCL acts as an acid. This is a neutralisation reaction between an acid and base to form ammonium chloride salt.

Some significant facts:
Bronsted Lowry concept forms a more general definition than Arrhenius concept to include a broader spectrum of compounds under the name acidic or basic, especially organic compounds.

Amphoteric Substances: These are substances which act as both acids as well as bases according to the situation. Water is a good example for this.

3. Lewis Theory of acids and bases

The PH Scale stands for Hydrogen Potenz scale and is a quantitative method to compare the relative acidic strength of species. It is the negative logarithm of H + ion concentration.

The pH scale is often said to range from 0 to 14, and most solutions do fall within this range, although it’s possible to get a pH below 0 or above 14. Anything below 7.0 is acidic, and anything above 7.0 is alkaline, or basic.

The pH inside human cells (6.8) and the pH of blood (7.4) are both very close to neutral. Extreme pH values, either above or below 7.0, are usually considered unfavourable for life.

* Properties of Acids and Bases

Characteristics of acid and bases given by Robert Boyle in the year 1661 may be used to easily distinguish between these two without performing complicated tests.

* Acids
- Taste sour
- Acids are corrosive
- It changes litmus from blue to red
- Acids are electrolytes
- They react with bases to form salts and water
- They evolve hydrogen gas upon reaction with an active metal such as alkali metals, alkaline earth metals, zinc, and aluminium
* Bases
- Tastes bitter
- Feel slippery or soapy
- They don’t change the colour of the litmus, they can turn red (acidified) litmus back to blue
- Acids are electrolytes
- React with acids to form salts and water

Some Quick Facts about Acids and Bases

- Any aqueous (water-based) liquid can be classified as an acid, base, or neutral. Oils and other non-aqueous liquids are not acids or bases.
- There are different definitions of acids and bases, but acids can accept an electron pair or donate a hydrogen ion or a proton in a chemical reaction, while bases can donate an electron pair or accept hydrogen or a proton.

- The pH scale is a measure of the acidity or alkalinity (basicity) or a solution. The scale runs from 0 to 14, with acids having a pH less than 7, 7 being neutral, and bases having a pH higher than 7.

- Acids and bases react with each other in what is called a neutralization reaction. The reaction produces salt and water and leaves the solution closer to a neutral pH than before.

- One common test of whether an unknown is an acid or a base is to wet litmus paper with it. Litmus paper is a paper treated with an extract from a certain lichen that changes colour according to pH. Acids turn litmus paper red, while bases turn litmus paper blue. A neutral chemical won't change the paper's colour.

- Because they separate into ions in water, both acids and bases conduct electricity.

- Acids and bases are important in the human body. For example, the stomach secretes hydrochloric acid, HCl, to digest food. The pancreas secretes a fluid rich in the base bicarbonate to neutralize stomach acid before it reaches the small intestine.


- Acids and bases react with metals. Acids release hydrogen gas when reacted with metals. Sometimes hydrogen gas is released when a base reacts with a metal, such as reacting sodium hydroxide (NaOH) and zinc. Another typical reaction between a base and a metal is a double displacement reaction, which may produce a precipitate metal hydroxide.
* Comparison between Acids and Bases
After reading this complete article, practice all the questions and formulas of Acids & Bases and you will become a expert. Join our IITJEE online coaching course and start scoring well. For more Chemistry topics notes and video lecture visit Misostudy. All the best.